A December with a Duke, Christmas Story by Collette Cameron

When writing a book, there are often scenes that are cut. THE DUKE’S FALLEN ANGEL originally had a prologue, which ended up being cut and the details peppered throughout the story. Still, I thought you might like to read it… 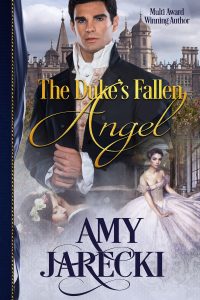 Newly orphaned, lost, alone, and crushed by the merciless hammer of despair, Britannia LeClair wandered the manor where she’d been raised. Only fourteen years of age, her fingertips brushed the items atop her mother’s toilette while memories made the ache of loss stretch the cavern in her heart.

Her throat raw, her vision blurred by tears, Bria, as she was fondly known, drifted to the library. There she discovered a wooden box in a drawer of her father’s sideboard with “Britannia” engraved on a brass nameplate. The hinges creaked as she opened it. Odd. Though it bore her name, the box contained a miniature painting of a woman she’d never seen before, a monogramed handkerchief, and 2500 francs—not a vast sum of money, but enough upon which to live frugally for a year.

Later an uncle arrived to lay claim to the manor. In the library, Bria sat across the writing table from the bachelor who smelled of pickling. He tapped his fingers atop a piece of parchment and frowned at her while foreboding etched in the lines of his face. “I told my brother he never should have taken in a foundling, and now look what has happened.”

His words stabbed straight through Bria’s heart. Had she heard correctly? “I beg your pardon?”

The man smirked. “They never told you, did they?”

She clutched her arms across her midriff and shook her head while a stone sank to the pit of her stomach.

He slid the parchment across the board. “This is your christening record.”

Translated to English, it read: “Britannia, no surname, a foundling.” A clammy chill spread across her skin while the room began to spin. I’m a foundling?

Uncle raised his chin and glared down the length of his nose. “Why did you not contract smallpox and die with my brother and his wife?”

A tear trickled down her cheek. “I do not know.”

Sneering, the man retrieved the paper and tossed it in the fire. “You are a demon, a witch. This is your fault. You have brought death to this house.” He rose to his feet and thrust his finger toward the door. “Collect your things and be gone with you this very day!”

Crying and hopeless, she packed the wooden box and what she could carry in a portmanteau and fled. With no one to whom to turn, Britannia paid the fare for a coach ride to Paris. Throughout the journey she stared at her tightly folded hands and spoke to no one. She was a foundling, a disgrace, a nobody. Who would take her in? Who would provide her references? Nary a soul.

In the midst of despair, the ache, the anguish, Bria made her decision. She must succeed. Either that or face an existence too wretched to imagine. After the carriage arrived, she followed the coachman’s directions and stopped in front of the one place she hoped to find a home—the dream she’d harbored since she’d since Maman had taught Bria to point her toes.

It took a good ten minutes to summon her courage and walk inside the Paris Opera Ballet School. The emptiness of grief stretched through Bria’s chest as she stood alone, taking in a deep breath. Please, God, help me gain a place.

Curling her toes inside her boots, she pushed inside and presented herself to an elderly clerk who wore a monocle. “I am Mademoiselle Britannia LeClair and I request an audience with Monsieur Marchand, s’il vous plaît.”

The man scribbled something with his quill before he glanced up and pointed to a bench against the wall. “Sit over there.”

She waited hours before the dance master appeared and, by the time the gaunt man stepped into the corridor, Britannia’s empty stomach growled and clawed at her insides.

Monsieur Marchand had gray hair and a humorless expression to his cadaverous features. He picked the lint from his lapel and drew in a deep inhale. “Why are you here?” he asked.

Bria squared her shoulders and affected her most unflappable expression. “I want to be a ballerina.”

“You and every other indigent child in Paris,” the man scoffed. “What is your training?”

Though the dance master’s lips thinned, Britannia did not allow his demeanor to dissuade her. After paying the fare from Bayeux to Paris, the francs from her box wouldn’t last. She had to convince him or perish in the streets while her dreams turned to dust. “My mother taught me to dance. I’ve danced all my life.”

“Who is your mother?”

“Sarah LeClair.” Her resolve bending, Bria gripped her hands behind her back. “Maman studied here.”

“Hmm.” Monsieur Marchand tapped his lips, looking aside. “I do not recognize this name. LeClair…”

Britannia’s fingers squeezed tighter while panic trapped her very breath. “That was her married name,” she explained. “Maman was Parker then. Sarah Parker, an Englishwoman.”

The man’s frown deepened. “The name is vaguely familiar. Did she not leave us to marry?”

“Oui. She married well. But…” Her throat constricted as she clutched her hands over her heart. “She’s in heaven now.”

“Ah, and so now you think to follow in her footsteps.” Shaking his head, he gestured to the door. “We only take the elite. Children who have been born to the master performers or who show uncanny ability. Mademoiselle Parker was merely a member of the corps. I’m afraid I must ask you to leave.”

Ready to drop to her knees and beg, Bria blinked away her tears and stood firm. “Monsieur, surely you can spare a moment for me to dance for you!”

“I am quite busy.” He reached for her arm, but she twirled away, commencing a passage from a scene in the opera Nina, ou La Folle par Amour, one she’d perfected, one Maman had thought was stunning. The fervent desperation she’d held inside burst through her movement as she stretched further and leaped higher than ever before.

Monsieur Marchand began to object but lowered his hands as Britannia executed an entrechat cinq, a jump only ever performed by a danseur. She finished with a triple pirouette and dipped into a reverent curtsey.

“How old are you?” asked the dance master, stroking his chin.

Standing taller, Bria’s breath caught as a thread of hope quivered just beyond her grasp. “Fourteen.”

“Non. Fourteen is much too old and you are not polished. You will never be a ballerina.”

“Please.” Her heart raced as she scurried backward before he could grab her arm again. “I-I learn fast. If you show me something once, I’ll master it on the first attempt.”

“Very well. Try this.” He executed a challenging combination obviously meant to put an end to Britannia’s plea.

She repeated the intricate steps exactly as he had demonstrated.

Still, Monsieur Marchand showed no sign of relenting until he sat on the clerk’s writing table. “That was technically correct, however, a ballerina must be more graceful. Imagine yourself to be a butterfly. Float through the movement.”

Her heart dared to soar. Rather than push her out the door, he’d opened the smallest of windows. Taking a deep breath, Bria attempted the combination again, slower this time and with a serene smile to hide the tumultuous despair squeezing inside her breast.

No emotion crossed dance master’s face while he studied her. “Come back in the morning, but do not think this is an acceptance. I will give you a month to prove to me you are worthy of being a student. This is the most renowned ballet school in all of Christendom and the only dancers I allow on stage at Salle Le Peletier are those who can capture my breath.”

Find your copy of THE DUKE’S FALLEN ANGEL: