A hardened warrior sets a trap for a saboteur within in his ranks, discovering the rebel is none other than Rhona MacDougall, the only woman he has ever loved. 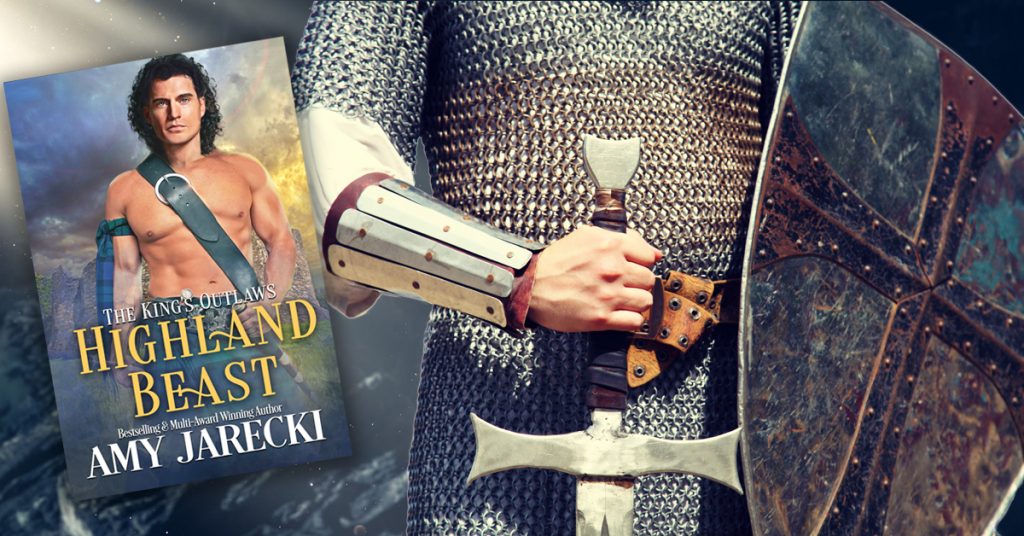 Arthur ought to be listening to the king’s oration, but presently he stood utterly dumbstruck. He, the knight who marched beside Robert the Bruce and had taken the Pass of Brander wielding his sword as if driven by Satan, was completely gobsmacked. He’d fought for the king, he’d killed for the king, and he had pledged his life to the king. If anyone dared raise a hand against the man who had climbed from the depths of tyranny to challenge the greatest army in all of Christendom, Arthur would be the first to sacrifice himself to save his sovereign.

But at the moment, it was all he could do to keep his mouth from dropping open and his chin hitting his mail-clad, blood-spattered chest. True, he’d expected to see Rhona MacDougall at some stage. Just not today. And definitely not standing in the Lord of Lorn’s stead. Arthur had expected a fight at Dunstaffnage’s gates. He’d expected the unsavory task of escorting the elderly Lord of Lorn to the pit prison beneath the donjon.

Aye, he knew of the prison. He’d visited Dunstaffnage a handful of times in his youth—always for fetes and Highland games and, though his father held the seat of Lord of Garmoran less than twenty miles to the east, Arthur had never been to the fortress upon an invitation from Lorn. In truth, the Campbells and the MacDougalls were not exactly allies.

But that’s not what presently occupied his thoughts. By the gods, Rhona was more beautiful now than he remembered. And the lass had become so self-assured. Though she wore a matron’s veil, wisps of striking white hair framed her creamy complexion. Vibrant blue eyes were enhanced and fringed by utterly white lashes. In all his travels, Arthur had never met anyone with white hair such as hers. The color was as unique as the lass. Though clearly, she’d come into her own, facing the king of Scots like a Highland princess born to rule.

Mistress Rhona, Arthur reminded himself. When he’d received word that she had married, the news had cut him to the quick. But where was her husband and why was she at the head of the clan? Had Rhona’s spouse been one of the MacDougall soldiers in the Pass of Brander who’d fled with John? Arthur prayed the man hadn’t been one of the fallen. Fortunately for clan and kin, once the MacDougall had realized they were outnumbered and outsmarted, they had tucked tail and fled. The casualties were not numbered as Rhona had indicated with her ill-begotten use of the term massacre.

Regardless of what had happened in battle, Rhona was bitter, to be sure. From the moment their gazes had met, there had been a blaze burning behind those blues—eyes he still adored, though he had no right to do so.

I must reassure her of Robert’s plans.

While the king’s oration continued, Arthur stood at attention, rigid and unmoving, though every fiber in his body ached. Two nights had passed since he’d last slept. They’d marched, sailed, and fought like demons. And yet, the Bruce had not stopped for rest. Once the battle was won, they’d headed straight for Dunstaffnage. The king had won the right to claim this western fortress and it opened the door for the army to march northward and secure the Highlands for Scotland once and for all.

Exhausted and covered with filth, Arthur studied Rhona. What must she think of him? His face was splattered with so much blood and mud, it was a wonder the lady had recognized him. Did she blame him for Lorn’s demise?

Of course she does.

“With that, I bid ye all a good eve,” boomed the king. “I foresee a prosperous future for us all.”

As a cacophony of voices filled the hall with everyone asking questions at once, Arthur moved to Rhona’s side. “’Tis good to see ye, mistress.”

“Sir Arthur,” she said with a slight curtsey, her gaze trailing to his filthy surcoat. “I see ye’ve earned your spurs.”

He glanced downward; the silver spurs buckled to his heels were covered with mud. “I was knighted at the king’s coronation.”

The corners of her lips tightened, as if he’d just uttered a curse.

I hope you enjoyed this wee excerpt! If you’d like to learn more, Highland Beast  is available in ebook and paperback at the following retailers. Dave Gillies has recorded the audio which will be available soon:

Amy Jarecki is a bestselling and multi-award winning author.