Excerpt from HER UNCONVENTIONAL EARL

Captain Gibb MacGalloway might adore women, but he does not allow them aboard his ship…

Females are too distracting for his crew—and too distracting for him, truth be told. But when his brother, the Duke of Dunscaby, asks him to provide safe passage to Miss Isabella Harcourt, the daughter of an old family friend, Gibb has no choice but to bend his rules. However, it is not until the lass comes aboard that he realizes Miss Harcourt is the lovely wallflower he’d tricked into giving him a wee kiss only the day before.

Isabella Harcourt expected to spend her days as a spinster…

Until her father announces he has arranged her marriage to an American silver miner who is over twice her age. She might be disappointed at the news, but she accepts her fate and boards the ship, her life in tatters. Worse, things grow even more daunting when she meets the blue-eyed stare of the man who’d imparted her first kiss only one day prior—a very passionate, bone-melting kiss. Now they must endure a voyage across the Atlantic, pretending there had never been an attraction between them, pretending they’d never met. After all, she is promised to another, and he is married to the sea. By the time the ship arrives in Savannah, will this star-crossed pair be able to say their goodbyes?

“What sort of wager?” she asked as they stopped at the quivers of arrows. She picked up a bow and tested it for tautness.

She released the string and let it twang. “I beg your pardon? What sort of gentleman wagers a kiss? I hardly know you.”

“You ken me well enough. I like Roman history and dislike crowds. What else is there?”

He handed her an arrow, then caught her by the wrist as she took it. “What say you, lass?” he asked, gazing into those enormous black eyes. He was a sea captain first, and though he’d been raised as the “spare son” in a ducal house, he’d never completely embraced the rules of etiquette—unless he could use them to his advantage. “I’ve issued a challenge. Have you the courage to accept?”

Licking her lips, Miss Raven Hair cast a nervous glance toward the house. “A-a small peck, perhaps? And no one must see.”

“Verra well.” Gibb liked that just fine—no meaningful kiss ought to be imparted in public. “And you, madam? What do you wager?”

The lassie’s nostrils flared as she looked him from head to toe. “If you win, I should like to know your name, sir.”

A wry grin stretched his lips. There this woman stood, completely aware that he’d sidestepped every convention of propriety, and yet she would only know his name if she won their competition. Perhaps a wee bit of mischievousness smoldered in the heart of this history-reading bluestocking?

“Why were you sitting alone?” he asked.

She loaded her bow and glanced at him over her shoulder. “I have a great deal on my mind.”

Gibb smirked. She most likely had a younger sister in the group of scavenger hunters who was as much of a hellion as Grace or Modesty. Miss Raven Hair released her arrow. It fell short of the target by a good yard. She immediately turned, blushing most adorably. Ah yes, with a bit of color, there was a striking elegance to her look. “Of course, you’ll allow two shots for practice.”

He let his gaze dip down the length of her muslin day gown and back up. “Inventing rules as we go along?” he asked, his tongue slipping to the corner of his mouth.

“Not at all.” She tossed her head, oblivious to his appreciation. “I’ve never used this bow before.”

“I’ll grant you that.” Gibb bowed. “Two shots for the lady.”

“You may have two as well.”

Her second arrow hit the edge of the target, but nowhere near close enough. He rubbed his hands, pleased to see his kiss might just be a certainty.

Except there seemed to be a bit of a hullaballoo in the Summerhouse. Had Mama spotted him?

“Ready?” he asked, trying to hurry the lass along.

She pulled back the string and homed in on the target. “Best of three?”

“By all means, but you must shoot all three arrows now.”

“Are you suddenly in a hurry?”

“I think the lassies are nearing the end of their hunt in the stables,” he said.

The woman fired her three arrows, one in the bull’s-eye and the other two outliers. She offered him the bow, smiling as if happy with her result. “Your turn, sir.”

Two footmen were now in conversation with Mama. He’d best hurry. “Three arrows,” he said. He loaded one and hit the bull’s-eye, then quickly dispatched the other two, much the same as the first.

“Unbelievable.” The lady stood with her fists upon her hips. “I daresay you are a far better archer than you let on.”

“I dunna recall saying I was unskilled.” But Gibb was a sailor, and he was no stranger to wagering or winning. He always wagered to win. Accepting a bet with questionable odds was fool’s play. A grin played in one corner of his mouth as he grasped Miss Raven Hair by the elbow and escorted her into the thicket behind an enormous oak. “I wish I had time to dally about, but it appears my attention will soon be commanded by my brother, or my mother, and quite possibly my sisters.”

Gibb placed his palms either side of her face—silken skin, a warm thrumming beneath. “Och, ye are lovely, lass.”

Dipping his chin, Gibb moved his lips toward her pert, upturned mouth. There was no time to prepare her with sweet words. Closing the distance, he took her mouth, intending a quick, gentle peck. He didn’t plan for anything more than a hasty caress, long enough to ignite a spark, but short enough not to be caught.

Holy mother, the sound was like an arrow thrust into his heart. Gibb caught it with his mouth and pressed his lips tighter to hers—to her closed lips accompanied by her rigid posture. Did this woman truly abhor kissing, or did she have absolutely no idea what a kiss was?

Inhaling the scent of vanilla from the south seas, Gibb intended to find out. He moved his arms around her and pulled her petite, luscious body close, imparting a wealth of kissing expertise and sweeping his tongue across those lovely, pouty lips, requesting entry while he slid his fingers upward and kneaded the silken hair at her nape.

With her next sigh, she opened for him, not terribly wide, but far enough for his tongue to slip inside and stroke deeply, sampling the taste of lemonade and something sweeter—perhaps an iced tea cake?

“Lord Gibb?” one of the footman hollered. By the sound of his voice, the man was approximately fifteen paces away. 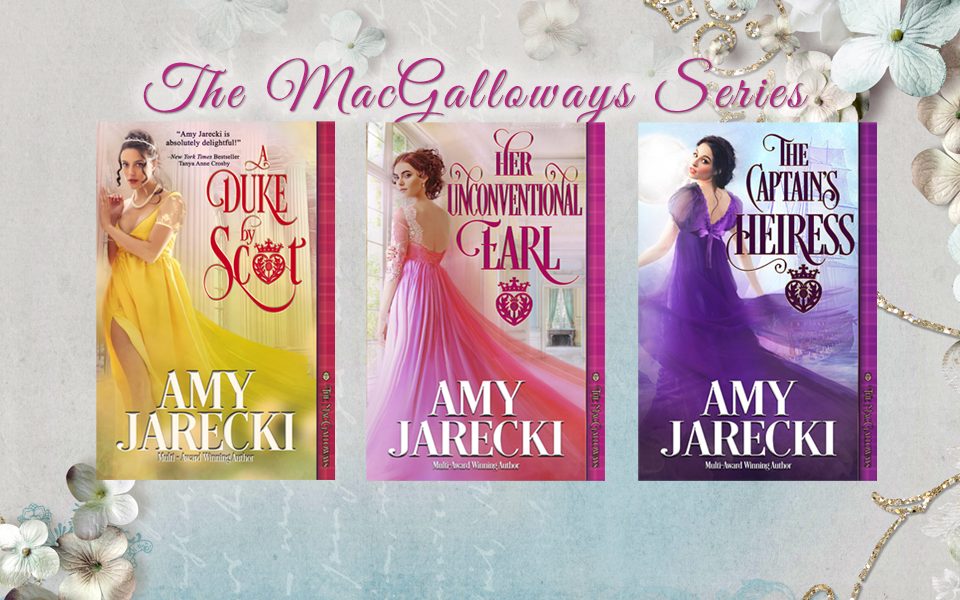 Excerpt from HER UNCONVENTIONAL EARL