SALE! Prices Slashed on all Six Lords of the Highlands Romances

Foreword from RUTHLESS, a Work In Progress

I almost never share my unedited work, but in this time where people are at home and possibly feeling a little out of sorts, I thought you might be interested to see what I’m working on. RUTHLESS is the first romance novel in a new series that will progress through the rise of Robert the Bruce. 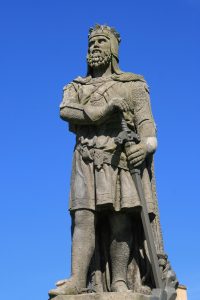 Though this series of books is about The King’s Outlaws, the king being Robert the Bruce and the outlaws being the heroes in these stories, it is of import to summarize the political climate and historical events leading up to the opening of Chapter One.

A great deal is unknown about Robert the Bruce’s early life. It is a fact that the Bruce Clan had divided loyalties because of their land holdings on either side of the Scottish/English border as many noble families had. However, Robert the Bruce’s actions even as a young man demonstrated a leaning of patriotism for his beloved Scotland. He was a loyal son, a dedicated father, and a nobleman caught amid the turmoil of his time. Robert the Bruce was only eleven years of age when King Alexander III died in March of 1286. Indeed, Robert would have still been a child at his father’s table when in 1290 he received news of the death of Alexander’s only heir, the Maid of Norway. With no clear successor, Edward I of England, who was Alexander’s father-in-law, was invited by Scottish magnates to select the next king. Several families stepped forward as competitors for the crown, but those with the strongest claims were the Balliols and the Bruces. Edward, who later earned the moniker “Hammer of the Scots”, immediately seized the opportunity to declare himself suzerain, or overlord of Scotland. The Bruces were seen as too powerful and thus in November of 1292 Edward selected the weaker competitor, John Balliol as king.

Afterward, to protect his family’s claim to the throne, in 1295 Robert de Brus, 6th Lord of Annandale, resigned the earldom of Carrick to his eldest son, Robert the Bruce, now a twenty-one year-old man.

During Balliol’s four-year reign, Edward required the Scottish king to repeatedly submit to humiliating subjugation. In 1296, Balliol retaliated, was defeated, and was eventually sent into exile in France. Most memorable in this rising was the sack of Berwick in the spring of 1296 where for three days the English slaughtered men, women, and children in one of the most savage acts of war ever committed. At Wark the Scottish nobles, the elder Bruce and his son the future king, were required to sign the Ragman Roll declaring fealty to Edward, after which, the patriarch of the Bruce clan decided to withdraw from the political scene. No matter what the new Earl of Carrick felt or how much he desired revenge, Robert was bound a familial duty to obey his father.

On the 7th of July1297 Robert the Bruce took part in a failed rising at Irvine. As a result, he was nearly forced to surrender his daughter, Marjorie, to Edward. But when Robert refused, three sureties were accepted on his behalf, that of Bishop Wishart, the Stewart, and Sir Alexander Lindsay. Needless to say, Bruce then became under a great deal of English scrutiny. Also in 1297, William Wallace joined forces with Andrew de Moray and defeated the English at the Battle of Stirling Bridge. In June of 1298, Wallace was retained as Guardian of Scotland and, as legend has it, was knighted by the Earl of Carrick. This act was a key indication that the Bruces, as with many nobles, had finally endured enough of Edward’s tyranny and had begun subtle activities to support the Scottish cause.

When Wallace left for the continent to seek help from the Pope, it is important to note that Robert the Bruce was appointed guardian along with Bishop Lamberton, and John Comyn, nephew of John Balliol (yet another contender for the throne). Bruce and Comyn did not get along, possibly because of Robert’s radical leanings toward independence, but his fervor ended up seeing him edged out of the guardianship.

By 1300, there was once again one Guardian of Scotland, Sir John de Soules. At this time Edward was still conducting raids into Scotland and in 1301, after skirmishes led by Robert the Bruce, Edward captured Turnberry, Robert’s ancestral castle. In a political ploy to regain his lands, he surrendered in January of 1302, six months before his twenty-eighth birthday. With the restoration of his estates, he was ruled by the determination to stay alive and stay free. It is said the ensuing years were the most difficult of his life. He was called upon many times to act in the service of Edward and prove his loyalty. But Bruce wasn’t entirely convincing. For example, when Edward asked Robert to supply siege engines for the 1304 attack on Stirling Castle, Bruce complied, sending the trebuchets without an essential component which rendered them useless.

Following the death of his father and the execution of William Wallace, Robert the Bruce became more daring in his pursuit of the throne. He propositioned John Comyn (the only other viable contender for the crown at this time) and asked John to choose one of two alternatives—either John reign as king and grant Robert all his lands and possessions, or Robert assume the throne, granting John the likewise property rights. John accepted the second proposition which was formalized by sealed indentures and oaths of good faith.

But Comyn immediately broke his oath by writing to Edward and revealing Robert’s “treasonous” acts. Robert the Bruce was then summoned to London where he was presented with the evidence and told he would be put to death. Assisted by the Earl of Gloucester, Robert immediately fled to Scotland and arranged a rendezvous with John Comyn at the Church of the Grey Friars in Dumfries. On the 10th of February 1306, the two men were unable to reconcile, Robert wanted to avoid violence but as their quarrel escalated Robert stabbed Comyn, an act that gravely disturbed the future king. He immediately rode to Glasgow and made a confession to Bishop Wishart and received and absolution for his sin.

Now, time was of the essence. There could be no more waiting. With haste, Bruce and his retinue rode toward Scone, the traditional place of inauguration. Many supporters joined him on his ride northward, including James Douglas, a man who had ample cause to hate the English clear through to his very soul.

As you can tell, I’m super excited about starting a new series of books!