When it comes to women, the Duke of Danby is an audacious rake, but when it comes to ridding the kingdom of smugglers, he’s leading the charge. The Prince Regent has bankrupted the country more than once, and Danby isn’t about to go down with a sinking ship.

The Honorable Eleanor Kent hides behind the image of a self-proclaimed spinster, though in truth she’s one of England’s most sought-after privateers.

When their paths cross at a royal dinner, Danby suspects the stunning redheaded woman is more than she seems. He engages her to consult on a chinoiserie remodel and Eleanor gladly accepts. Indeed, she’d rather keep her enemy close where she can watch his every move. Though neither duke nor lady has a clue of how tangled the web they’re spinning will become. As the heat ratchets up, so does their unbidden attraction. Will they get burned before it’s too late to run?

When Angus Og MacDonald, Lord of Islay agrees to harbor Robert the Bruce from the clutches of King Edward, he becomes an outlaw of the English crown. They sail to Ireland, seeking support from kin but are forced to flee for their lives. As Angus escapes, it is not a man he finds hidden in his birlinn. A wee wisp of a lass attacks like a screaming banshee with a battle axe in her hands. Then the wrath of God erupts in a violent storm, smashing the boat to smithereens. Now, Angus fights for survival, hell bent on saving them both.

Anya O’Cahan awakes half drowned in a tiny chapel on a deserted isle with none other than Fairhair, the man with the devil’s heart, the vile brother of the beast who killed her Da. Terrified out of her wits, she does everything in her power to escape the Highlander’s clutches. But Anya’s attempts are thwarted by the cunning, far too beautiful lord. Worse, Angus takes her before the King of Scots who seizes her as a political prisoner and thrusts her into the care of none other than Fairhair himself. Will this union of two hated rivals plagued by unwanted and uncanny attraction erupt in passion or war? 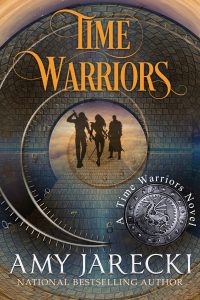 Recruited into the exclusive and highly secretive Military Academy of Martial Arts, sixteen-year-old Genesis Mans relishes the challenge, even after upperclassman and super jock, Noah Jones, tries to convince her to quit. Yeah, he may be the best fighter in school, but he’s totally wrong about her. His warning makes the girl fight harder to succeed, to uncover secrets first years aren’t allowed to know. She’s curious, she’s smart, and her developing second sight leads to peril beyond her imagination—straight through an off-limits time warp—with Noah and mastermind, Amir, in her wake.

Genesis soon learns she’s not on a joyride. Only a chosen few can travel through time and they have no idea where in history they’re headed. All they have to rely on is their God-given talent, elite training, knowledge of the past and, most of all, their will to win. The Qiang are meddling with the past and if they’re not stopped, tomorrow may never come.

Landing in 1215 London, these highly trained ninjas must cast their differences aside and work together to find the enemy and prevent them from altering time. And there’s nothing like fighting for their lives to transform a heated rivalry into an indestructible bond. But this mission is no date-night sparring match. It’s as real as it is deadly.

Though I’ve written time travel books, TIME WARRIORS is my first foray into young adult. I hope you’ll give this action-packed adventure a chance!

When Sir Arthur Campbell leads an attack claiming Dunstaffnage Castle for Robert the Bruce, he is rewarded with both the keep and surrounding lands. As he assumes the lairdship, he finds a saboteur within his ranks. He sets a trap to ensnare the culprit, only to discover the rebel is none other than Rhona MacDougall—the only woman he has ever loved.

After her clan is devastated by war, Rhona refuses to bend to Arthur’s whims. Aye, he once stole her heart, but that was before he fought against her kin. When in his presence, she plays the demure lady, though behind the scenes, she’s doing everything in her power to subvert his authority. And she thinks she has him fooled…until he beats the lass at her own game.

Prepared to meet his condemnation, Rhona bravely stands before this man whom she has deemed a beast. But Arthur confronts her with a proposition she never dreamed possible—if she proves that she can change. If not, the desire long ago burned onto their souls just might hold them both captive for eternity.